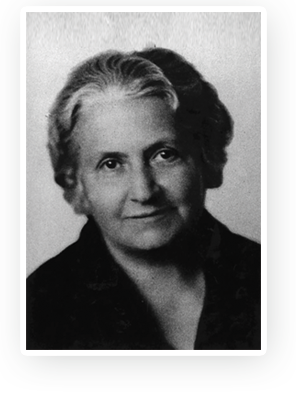 Maria Montessori was born in Italy in 1870 and was the first Graduate PHD women in Medecine. She was inspired by the work of Itard and Seguin, two French doctors interested in child psychology. After having worked in a psychiatric hospital she founded a specific school for mentally disabled children. Her observation led her to conclude that they needed manual activities in order to develop their intelligence. She created equipments for early learning, and some were even able to reintegrate a normal school curriculum. She opened a school in the suburb of Rome to awake the "normal" children. She worked with equipments of daily life, material that refines their senses and supports to approach mathematics, reading and writing. The children became autonomous in the learning process. Maria opened several schools in Italy before their closing by the fascist movement. She moved to India where her pedagogy was broadly followed. She ended her life in the Netherlands in 1952. Her son, Mario, will then continue to make her pedagogy known.

This email address is being protected from spambots. You need JavaScript enabled to view it.